I was asked by Action for M.E. to write a post as part of their Hidden Faces of M.E. campaign highlighting the difficulties sufferers have in explaining the severity of their condition. I’ve written about how it’s my good days that hide me the most.

“So you get very tired, right?”

“Yes. But it’s not just tired, like ‘I need to sleep’, it’s tired like ‘I have the flu and I played a rough game of five-a-side while I slept. And, like, uh, I have real difficulty thinking straight. So if you were to ask me a question, I wouldn’t be able to answer you.”

“Because you don’t know the answer or because you can’t find the words?”

“But you don’t have pain right? Because that’s fibromy-whatever-it-is.”

“Myalgia. And when I’m really bad, I do get really painful limbs and a sore throat.”

Since I got sick over a year and a half ago, one of my most challenging symptoms has been a chronic difficulty in making clear what living with M.E./CFS is like. The perception that I am just sleepy (that’s a dwarf) or poised to fall asleep at any time (that’s narcolepsy) or just plain lazy (that’s just plain rude) can be as much of a difficulty as the very real physical symptoms I face.

For the first few months I was ill, I had what I now view as severe M.E., though it took me many more months to pin down a diagnosis. Mumbling my way through conversations, I spent much of time at least in bed, if not asleep, as my body desperately tried to refuel batteries that just didn’t hold a charge. During this time, I was hidden away from the world, from my friends, but most importantly, from the person I really am. When I eventually managed to put on my trademark thick arch of black eyeliner, the shock of recognition on my mum’s face made it clear she had only been living with a ghost of her daughter for the preceding months.

Through a strict routine of resting and planning and pacing, I am now living with moderate M.E.. I can get dressed, hold conversations and the application of make-up is no longer a notable event. But, though this is a great step forward in terms of health, it’s where the real hiding has begun.

I describe myself as housebound, but I leave the house. When I’m in a good patch and I stay home and I take my hour of rest each morning and afternoon and I stay in my pyjamas and don’t wash my hair, I can muster up enough energy to potter around as a functioning human. I can watch television. I can make meals. If I’m happy to add extra resting in, I can do some writing or bake a cake.

But I have never aspired to be only functioning. I don’t want to be Rapunzel, locked away from the world. When I go out, it’s my illness I lock away. I put on clothes that aren’t designed for sleeping in. I paint on eyeliner. I plan when I will rest the next day, and the next, to compensate. I leave the house.

When you spend so much time shambling around in worn-out Hogwarts pyjamas, with unwashed hair, and dark grey smudges of tiredness under your eyes, the opportunity and to leave the house and not look like a little duvet goblin is hard to resist. When I go out, if I’m not clutching my walking stick – collapsible, and thus more easily hidden – you would have no idea how ill I am. You cannot tell by looking that I consider the ease of preparing a meal sitting down a deal-breaking factor in whether I eat it. 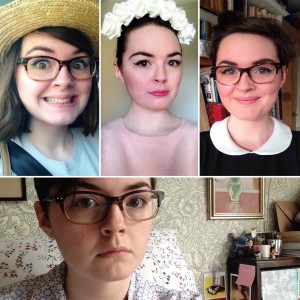 When my friends see me, out of the house, looking as I always did, laughing and talking like the Rosie they’ve always known, it can be easy for them to assume that I am better and hard to comprehend that this is not a cold I’m slowly but surely recovering from. It’s a long, difficult road. I have good patches, I have bad patches. You can’t see either of them coming.

If asked how I am, I don’t like to explain how hard my day-to-day symptoms can be. I don’t like to bring people down. It’s a long-standing joke, but when asked how we are, we’re programmed to say “Well, thanks!” But I’m not well. I’ve recalibrated my programming to spit out the automated reply “I’ve been better, but I’m getting there.” But getting where? We see illness and recovery as having a clear progression. You feel ill, you get diagnosed, you take your medicine, you get better. Chronic illness holds no truck with this pattern and I don’t like to disappoint people by telling them that, despite the brave face I’ve managed to put on, I have taken a diversion from the expected road to recovery.

The Rosie who posts to my Twitter doesn’t seem that ill. You find there a devoted knitter, an avid film-watcher, a writer and a baker and a friend. She doesn’t stop to tell you when it’s nap time twice a day, or how wretched she feels when she wakes up or how much pain she’s in. There are many reasons why: it’s depressing, it’s tedious, it’s not exactly the person she wanted to be in her mid-twenties. But she is and I am. This is what living with M.E. is like, no matter what you think you see. I may be hidden away from sight but I will not be hiding any longer.

You can find out more about Action for M.E. and their Hidden Faces campaign by visiting their website. This is the first in an ongoing series about living with a chronic illness – if you’d like to read more, you can subscribe or find me on Twitter.